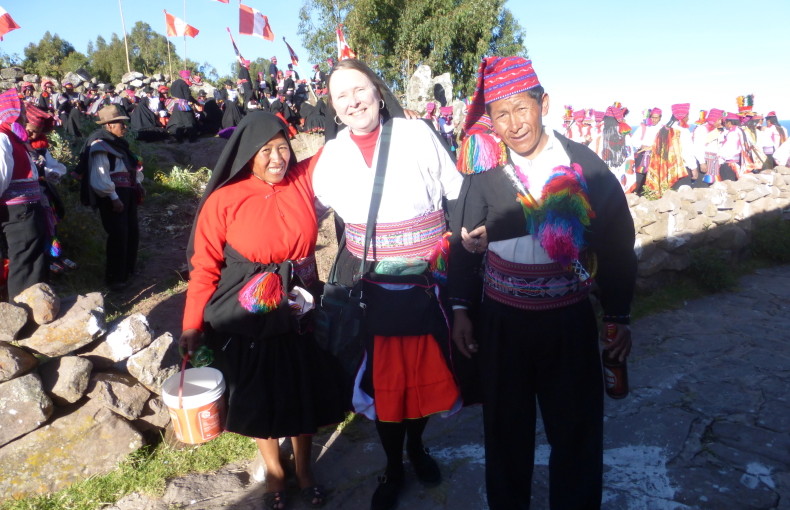 On our most recent visit to our extended family of godchildren on Taquile Island during the month of May 2016, we were caught up in the middle of the festivities of Pentecost. I was accompanying a small group of vegetarian travelers who were more than happy to join in with the party. First of all, we were dressed ‘decently’ by Elias and Maria, our godchildren whom we had married many years ago. This meant that all the ladies were clothed in several layers of colorful skirts and a wide woven belt plus the chuku (black headdress with colorful pompoms). Our male member of the party turned Taquileño, too. He wore the native woolen trousers and shirt, waistcoat, finely woven belt, topped up by a ‘married man’s knitted hat. The fact that we had no proper ojotas (sandals made of car tires) or flesh colored leggings to wear, not to mention that the skirts looked rather short on us tall ‘Gringas’ created some sneers, but at least we were trying. 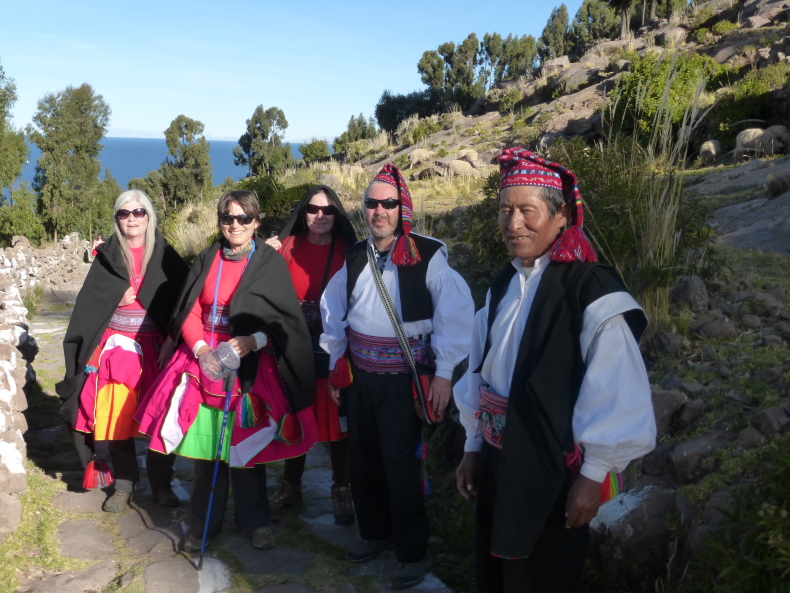 The extra weight around our bodies slowed down our procession as we were waddling up to the place near the school where all the carguyoq (dignitaries in charge of organizing the festivities) of the lower half of the island had gathered. They were playing the sikuris (panpipes) and dancing in a big circle, only pausing to exchange some coca leaves and take a toast of beer or chicha (home brew) made of quinoa. 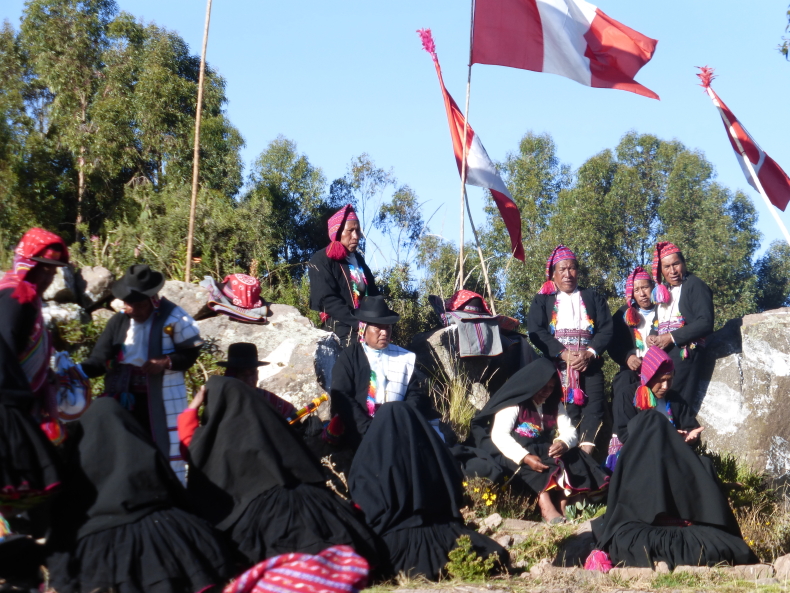 We walked on and reached the main square in time to secure a good spot on the roof of the communal craft co-operative for observing the processions coming in from both the lower and upper half of the island, representing the two complementary halves in Andean dualism. The members of the two different dance troops and musicians entered the square almost at the same time. There was suddenly a cacophony of sounds as each band and group of dancers tried to impose itself on its rivaling group. My compadre Gonzalo had explained to us before that the idea was that the group that had attracted the most supporters and managed to dance best to the rhythm of their band, without getting lost in the rhythms of the rivals’ band, would win the competition. It seemed clear to us that the group from the lower half of the island, led by Gonzalo’s neighbors Tomás and Yolanda were the winners. Their troop was strong and well supported. At least we hoped that they would be the winners as the tradition claims that if the lower half wins then it will be a good agricultural year. Nearly every ‘catholic’ festivity had replaced an indigenous fertility rite at least on the surface and obviously, Pentecost was no exception. 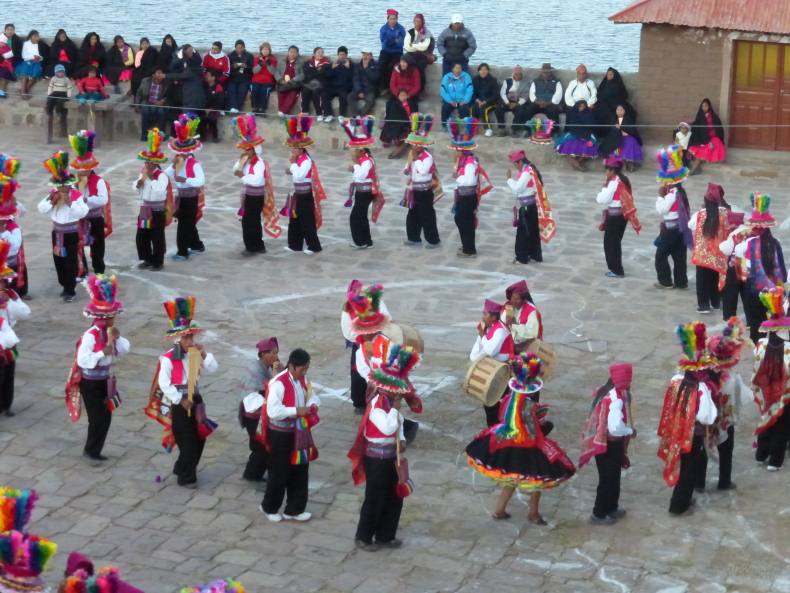 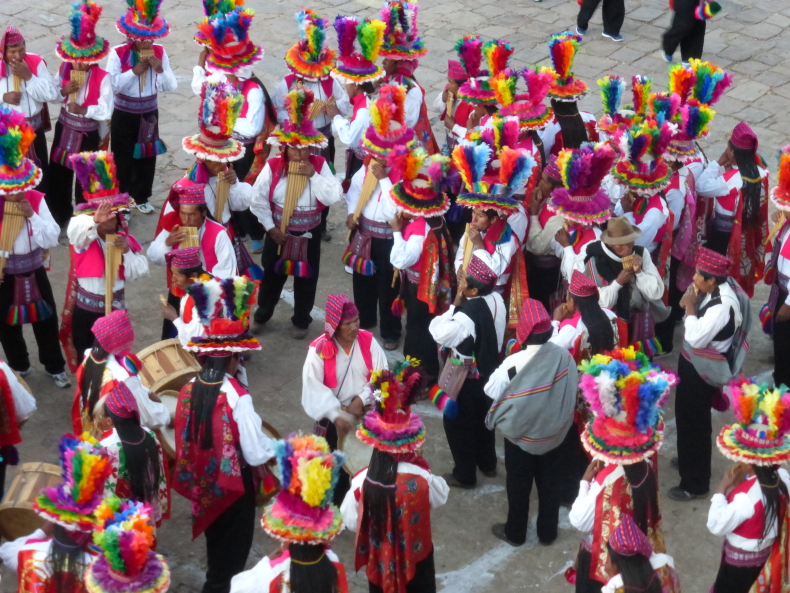 The central day of the festivity, unfortunately, coincided with our departure to Puno. But we managed to get a least a glimpse after taking an early lunch with the family. We hang out with Tomas and Yolanda who were busy putting up the decorations that marked their spot in the main square. Now the bands were playing pure string instruments and the dancing of the different groups continued. I was soon spotted by several members of the family and friends who invited me a drink and then proceeded to get several of us dancing in their group. We wished we could have stayed longer but had deadlines to meet like our plane journey to Lima the following day, so we had to sneak away, ignoring all suggestions of our hosts to postpone our journey… 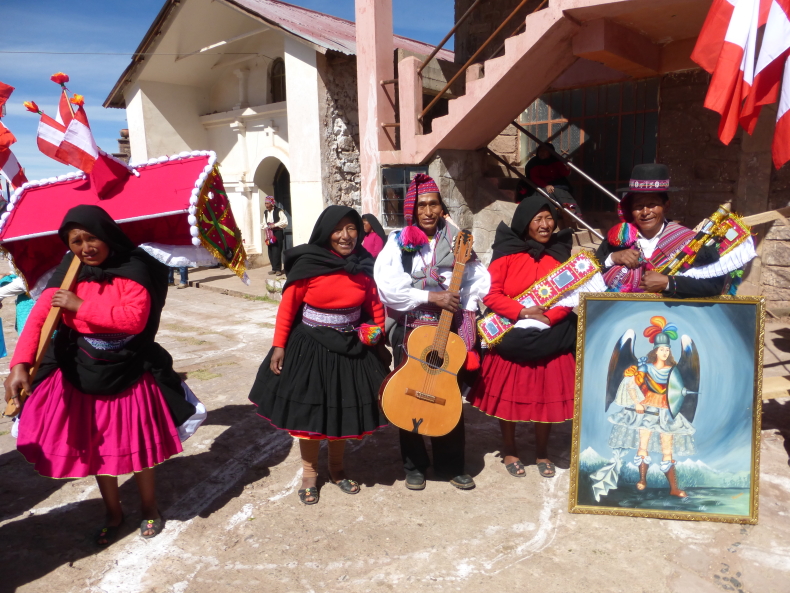 What will stay in our hearts is the marvelous hospitality and community spirit that we were able to experience. The rites celebrated by the islanders all reaffirmed the values of precedence of the collective over the individual. They also evoked ancient Andean traditions of reciprocity. Under the reign of the Tawantinsuyu, the Inka rulers and local curacas (leaders) ensured the loyalty of their subjects through generous feasting and entertainments, including the distribution of chicha (corn beer) and displays of music and colorful dances.

The modern day dignitaries of Taquile Island excel themselves in such displays of generosity towards their kin and neighbors. In fact, they would lose their honor and prestige did they not reenact the role that is expected of them. One can furthermore observe a certain rivalry between the different dignitaries, as each of them strives to enlist more support from the community than his peers.

The two dance parties approaching from the different suyos or parts of the island and coinciding their arrival at the square is reminiscent of the ritual mock battles between Hanan (Upper) and Hurin (Lower) Cusco of the Inkas, that were performed at the Kusipata Square in Cusco:

It is interesting to note that in order to guarantee a successful agricultural year on Taquile the Hurin or Lower and Southern half needs to win the mock musical battle. Perhaps this is a remnant of ancient days when political power in the Titicaca region was more likely concentrated in the Kollasuyu and further south in Tiawanaku rather than in the Northern and Hanan half pointing towards the center of their Inka colonialists and where nowadays the center of the population is found.

3 thoughts on “Fiesta on Taquile Island”